As the 10-year anniversary of my arrival in El Salvador approaches, I have been given to a period of introspection. One becomes conscious that there is a collective history that surrounds us and, with time, we are allowed to penetrate it. For me it has been an exercise in humility to have the privilege to work with a people with such a deep and storied history.

The one inescapable personage in El Salvador’s recent history, the most famous Salvadoran perhaps, is Archbishop Oscar Romero. Known simply here as Monseñor. There is no need to add the surname. The people already know to whom you refer. A man of humble origins, an intellectual, but above all a man of the people. In a strange quirk of fate, he unexpectedly became Archbishop of the capital city San Salvador at a time of political upheaval. He was seen as unpresumptuous, bookish and would not challenge the government, military and right-wing death squads who were trying to quell a movement within Salvadoran society that was demanding greater equality.

In his three tumultuous years as Archbishop of San Salvador he rose to become the voice of the people. His weekly homilies were broadcast to the nation. In these homilies, meticulously prepared, he informed the country of the human rights violations perpetrated, for the most part, by the military and the death squads funded by those who did not wish to see social change. Indeed, it has been said that it was not necessary to carry a radio with you to listen Romero’s weekly homily. You could hear his distinctive voice resound from every door and window of every house as you passed them. He became the voice of the people, the voice of the voiceless. For this he was defamed, harassed, imprisoned and threatened with death. In the last of his Sunday homilies he pleaded with the military personnel who were perpetrating these crimes against their fellow Salvadorans, that when given an order to kill an innocent person, it is the law of God that should prevail. They should disobey such orders. This supplication was to seal his fate. The following day, as he celebrated Mass, an expert marksman would fire a solitary bullet through his heart, killing him instantly. In May 2015 he was beatified as a martyr of the Church. And in October 2018 he was made a saint. El Salvador’s first saint.

El Salvador’s history is a history of martyrdom and sacrifice. I now work with two groups who have featured prominently in these past events. The first group, who arrived in El Salvador in the late 1960s, was a delegation of Belgian priests and religious from the archdiocese of Brussels. This group saw the social movements of the 70s in El Salvador as just, and with the arrival of liberation theology saw the means to promote a more equal society. For this they were persecuted, one of their number was captured, tortured and expelled from the country, and after their house was blown up, two went to live in Nicaragua and one went to live in the mountains of Morazán to evade capture and almost certain death. The latter, Father Rogelio Ponseele is the leader of the organisation I now work for.

Father Rogelio was given a choice to return to Belgium or move to the mountains, under the protection of the guerrillas, and minister to the people who remained, in what was then called red zones. For over 10 years he lived with the firmament for a roof. A ruck sack and a piece of plastic his protection against the elements. He slept where the people slept. He ate what the people ate. He suffered the same anguish from the constant bombardments. And yet with the Bible in his hand he quietly ministered. A constant witness to a suffering people.

The second group I work with are called the Missionary Sisters of the Small Community. A product of the burgeoning liberation theology movements and in particular the Base Ecclesial Communities. These sisters felt the full force of a persecuted Church, where it was viewed as subversive to be seen with a Bible in your hand. One of their number was martyred as she went, as a nurse, to support those struggling for social change. Another was captured and tortured. The house they lived in was attacked by right-wing death squads. Thankfully they were not at home or they would almost certainly have been murdered. Through all this the sisters continued to minister to the people. Consoling those who had lost family members. Searching the roadsides and ditches for the disappeared. Accompanying families as they went to identify family members in the morgues.

This is part of the history in which I now find myself. Humbled at such courage and dedication to serve the most vulnerable among us. I find myself asking what I would have done in their position? One of the sisters said to me that they do not know how they did it themselves. I believe that if we have a conviction that what we are doing is right and place our faith in God, we will receive the strength, through the Holy Spirit, to overcome all obstacles come what may.

In 2015 I joined the pastoral team of Father Rogelio, and the Sisters Carmen Elena and Ana María. The pastoral work began in the 70s continues to this day. There are three generations of women who have passed through the women’s congregations. The young people who received scholarships are now the members of an association (CEBES Perquín) that has been set up to guard the legacy of the work of Father Rogelio and the sisters. CEBES Perquín has been known for its protagonism in the area of formation. To this protagonism I lend my skills as a software engineer. We have trained 6 software developers, created a social enterprise and are increasingly recognised for our technical training. This a welcome addition to the already established areas of pastoral work with the women’s congregations, youth formation, care for the elderly, family activities and bible study groups.

This year the Base Ecclesial Communities celebrated 50 years in El Salvador. It has been a privilege to listen to the testimonials of so many dedicated people who have given their lives so that the children of tomorrow may have a brighter future. This is what inspires me to continue with the portion that has been allotted to me. When times get tough, as they invariably do, we have the witness of so many people to help keep us on the narrow path.

El Salvador post-conflict continues its fight against violence. I am reminded of two neighbours Victor and Olmy, who at the ages of 14 and 16 were victims of this terrible brutality. Attracted to be gang members by the offer of that they could not afford. Pawns of poverty. Once a member of a gang the price you pay for leaving is your life. Once recognised as gang members by the local vigilantes, they are given the choice: leave the gangs or face death. A death sentence for being destitute. On a November evening as dusk met darkness a boot shattered the silence of a humble home. Olmy and Victor were dragged a short distance from their door and shot dead. They deserved better. And we owe it to ourselves to make sure that the Olmys and Victors of tomorrow do not share the same fate. 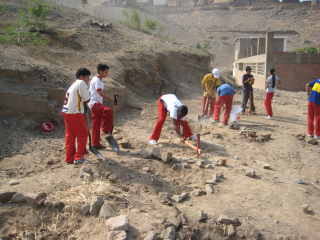 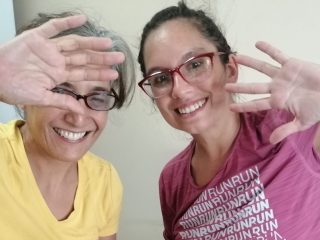 Next Post (n) In a time of Covid, how has Viatores Christi adapted?