In December 1963 I arrived in Mansa (then called Fort Rosebery) as a young secondary school teacher to be greeted and welcomed by two Bishops: Bishop Pailloux (French) and Bishop Clement Chabukasanshya (1st Zambian Bishop in the country). I was the first teacher to be appointed by Fr E. Carriere (White Father), then Education Secretary in the Diocese, to work in the new secondary school that was scheduled to be opened by the White Fathers in January 1964. It should be noted that Zambia was not independent at this stage. The country was known as Northern Rhodesia. General elections were held in Northern Rhodesia on the 20th and 21st January 1964. The country became independent in October 1964 and Dr Kenneth Kaunda became President of the Republic of Zambia.

After the celebration of Christmas 1963 I was asked by the Bishops to be the first Headmaster of the new Secondary School (boarding, boys only) and to try and organise a teaching team and an ancillary team as quickly as possible for the new school. Seventy boys – two classes of 35 each – had been selected for enrolment in the school from numerous primary schools in the Luapula Province. This province is twice the size of Munster and this was the 2nd secondary school for boys to be opened in the province. One had been opened for girls. The school opened on the day after the elections. We named the school ‘St Clement’s Secondary School’ – out of respect for Bishop Clement Chabukasanshya.

The challenges to be faced at this point were many: organising a teaching team, provision of food for the students, hiring of suitable staff (cooks etc.) for the kitchen and dining hall, cleaning staff, provision of sleeping materials for all students (dormitories), secretarial support, electricity, running water, textbooks, copies, science equipment, etc. It should be noted that the water supply and the electricity service were turned on only a day or two before the school opened. We overcame the challenges with vigour and enthusiasm “agus le cabhair Dé ólá go lá”. We had a very successful and exciting first year in the school. The pupils completed the equivalent of Junior Certificate Examinations very successfully after two years and then they prepared for the Cambridge Overseas School Leaving Certificate Examination for three more years. I stayed at the school for six and half years having prepared students for three such Cambridge Examinations. The school set a high academic record and also very high standards in sport, football and cross country running. We had a most enthusiastic and supportive teaching team. In 1970 I was appointed Regional Inspector of Secondary Schools in Zambia. I worked in the Inspectorate for three years and then returned to Ireland in 1973 to teach after 9.5 years in Zambia.

Thanks to the opportunity provided and supported by the Viatores Christi it was a great privilege for me to have had the opportunity to work in education in Zambia for almost 10 years. It was both challenging and rewarding in many respects. It was a dramatic, exciting, awesome and worrying project to start a new boys boarding secondary school in a developing country. But we got through it thanks a very loyal local and international teaching team who worked very hard day in and day out to serve the educational needs of the students. On the team was my wife Anne for 6.5 years. We worked in close collaboration with the White Fathers who were an inspiration and supported me all the way in developing a very successful secondary school that is still functioning very well to this day.

(John and Anne are pictured below) 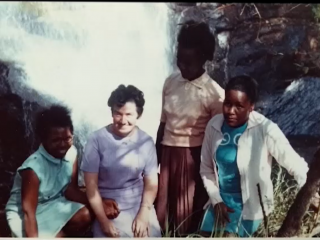