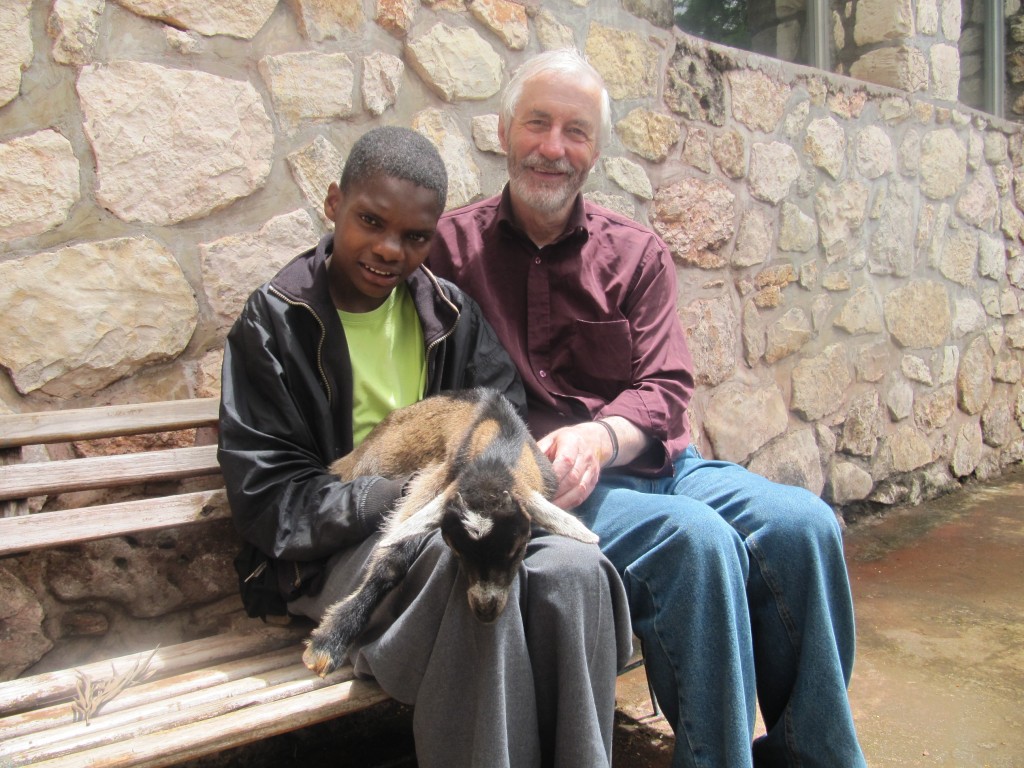 Michael Nolan, pictured on the right with a young Haitian man in Kenscoff, is a retired primary school principal from Co. Galway recently took up an assignment working alongside Gena Heraty, Special Needs Program Director at Our Little Brothers & Sisters, Haiti. Here he shares a reflection on his journey to Haiti.Dublin Airport 26th April 2015

After a lonesome farewell, Seán and Marie saw me off. The gates to departure were to close at 2.55pm, so I headed straight to the security area. On fulfilling the customary procedures, I dashed in the direction of terminal 1. The further I went, the quieter it got. Reaching the door that led to the final departure gate, I was stopped in my tracks. It refused to open. I wasn’t beaten yet. Using my nails, I managed to force it enough to squeeze through and darted down to the gate. Not a soul, not a plane! Retuning back and the door wouldn’t budge thistime.Spotting an airport employee and waving my arms frantically in despair, I banged on the glass. He noticed me. Coming closer and angrily pointing his finger, he shouted, ‘I’ll have you arrested, I’ll have you arrested’. Together with the look on his face, it sounded ominous. Fumblingin his pockets, he produced keys and opened. ‘How did you get in, somebody let you in ? I nodded. Then a mysterious transformation took place. In a calm, normal tone, he  inquired, ‘Have you a boarding pass?’ Before he was finished, I had it in his hand and he was studying it. Walking together towards the flight schedule, his gaze settled on Flight 505. And mutely he said, ‘Flight 505 at 16.15, you’re an hour early, relax for a while’, as he returned my ticket. An hour early for me! A good or a bad start?

Four fifteen arrived and I discovered seat 33 beside the window. I hadn’t my seatbelt tightened, when a tall, bronzed passenger with hand outstretched was sitting beside me saying, ‘I’m Pako from India’.  On revealing my identity, his eyes sparkled and remarked, ‘I’ve been there twice, Killarney and Westport are my favourites. Your history is not unlike ours. Michael Davitt’s experiences as a young boy sowed the seeds that brought about the land transfer in the early 20th century. Gandhi’s background as a youth activated the idea of independence in his mind. And Charles Parnell was the second half of that duet that activated the constitutional Home Rule movement.”  A history lesson on the way to Kenscoff!, but I liked it!

Then he embarked on a very interesting person, Ella Young and his eyes even shone brighter. It was the first time I heard her name spoken but I read a bit about her. She was a member of Cumann na
mBan in the early republican movement. She was almost refused entry into the United States because of her strong, insisting belief in leprechauns.  She was on her way home until she plucked a Trinity parchment from her pocket. An air hostess came along. ‘Mr. Pako, can I see your ticket,
please? ‘Hmm, I see, seat 54, it’s ten rows up on the left.’  Disappointed and I eagerly looking forward to chapter two.

The food was nice but the rest was nicer. Arriving at JFK airport a few minutes to midnight, I had a few hours to kill before boarding for Port au Prince. A tram took me to the nearest point to terminal 5. This was a bleak, chairless area. An occasional passenger was sleeping on a bag or resting against a railing. I pitched my bits and pieces on a deserted information desk and supported myself on an external bollard while keeping an eye on my goods. A fresh, welcoming breeze came from the city. Perpetual concentration was difficult and a few times I lapsed. The last time, I alerted myself just in time to prevent my lap-top from being thrown into a moving, rubbish container.

I gathered my belongings. Passengers came to me looking for directions. I figured out their queries and they were happy-not mentioning what happened in Dublin!  A coffee and a slice of brack passed away a while. Picking up and flicking through ‘The Economist’, I came across an article on ‘Europe’s Boat People’, which stated that several European countries were critical of the brave, rescue attempts in
the Mediterranean, which only acted as a magnetic force encouraging more migrants. On the following page was Greek’s wreckless spending  and I on the way to Haiti!

Counter staff returned at 4.30am. Security checks started at five and by the time I attended there were about fifty before me. On getting through, I relaxed again with ‘The Economist’ Then I made a huge mistake. I had a breakfast of coffee, turkey, beans, lettuce and an unknown vegetable. We had boarded by nine and somewhere over The Bahamas, I felt very uncomfortable. My stomach was very choppy. Touchdown couldn’t come quick enough. It was 36C leaving the plane. Passing through the glass corridor on the way to Immigration, I almost passed out. It was scorching. After collecting my luggage, I unintentionally jumped the queue to exit. Roars and waving arms alerted me and I hastily retreated behind a hundred. I was saturated. I thought I’d never make the door. Fresh air, at last and Colin
Brennan (another VC volunteer, from Ennis) were like manna from heaven. Also, there was Sr. Helen
Ryder of ‘La Sainte Union Sisters’. I had two valuable envelopes for her from their convent in Banagher.

I collapsed into the back seat. But my stomach! It’s strange how much you would be warned and wary of food and water in a third world country but you’d never think you would be caught out somewhere like New York. Curiosity got the better of me, I straightened and looked out. We passed tin shacks, cloth-like tents and decaying buildings with feeble frames peering out of dusty entrances. We dodged around rugged chunks of concrete, gaping holes and piles of litter baking in the sun. Women drenched in sweat carrying large baskets on their heads, with buckets of water in each hand, walked beside us. We eventually reached St.Germaine’s House where Gena Heraty from Westport had a warm welcome for me.  Gena is an administrator of ‘Our Little Brothers and Sisters’ orphanage, Kenscoff – my destination. She also set-up and runs a Special Needs Program there.

I got the prime position in the kitchen, between two open doors with three glasses of water in front of me. Liquid never tasted so good. My future pint! On the road again with an extra passenger. The dusty, clay track turned into a firm, tarred surface with the wide craters remaining. We drove by elderly
vendors standing behind small tables  of mangos, melons and potatoes.  Our climb was getting steeper and harder on the engine. Stopping suddenly, Gena hopped out and returned with a sole Lucozade-like drink, just for me.

Bliss! As we rose, you could feel the temperature drop but the engine was straining. Colin deftly manouvered around a family of goats and large boulders.With a struggle, we reached the orphanage and there to meet me were many smiling little faces willing to help with my luggage.

Introductions, a cup of tea and straight to bed. 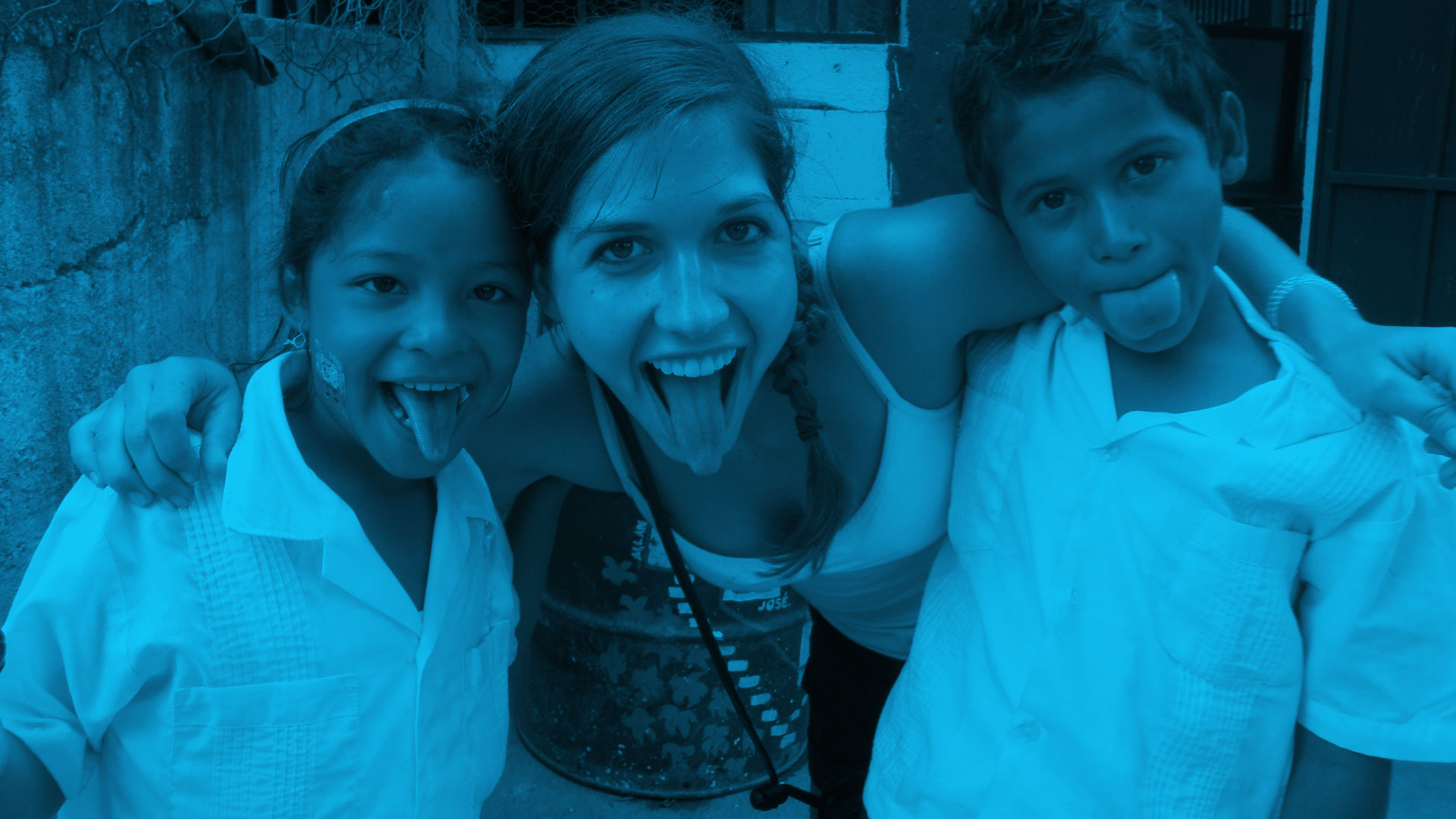 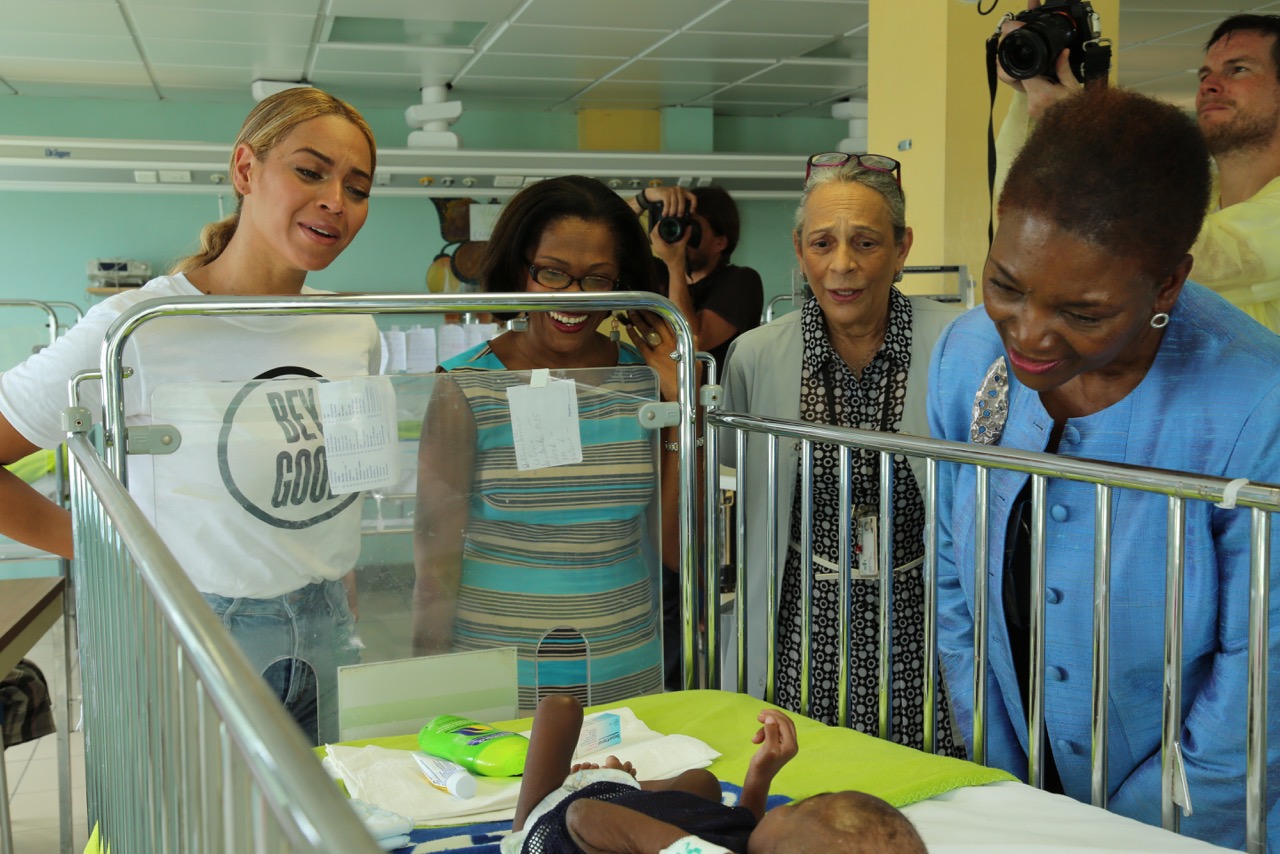