Despite progress to address land related legislative matters, the land sector in Uganda still faces several challenges. The ever-increasing population density, the use and transfer of scarce land and natural resources and most importantly, policy and institutional weaknesses are among the factors leading to the increase in number of land conflicts.

Prevalence of land conflicts in Uganda

Land disputes are not a new occurrence but the heightened rate shows the loopholes in the land laws which are dysfunctional. According to the Ministry of Justice, land conflicts rank the highest among conflicts countrywide with an occurrence of over 34% and are often the cause of other clashes including family and domestic violence, assault and murder. 32% of the reported land related cases escalate from boundary differences.

Background of the dispute

Muhumuza Deo, a resident of kyesiga village in Hoima District-Western Uganda, filed a complaint at Justice and Peace Commission (JPC)-Hoima Catholic Diocese against his four brothers over a piece of land that he claimed was given to him by his late father.

“Our father allocated the disputed land to me but boundary marks (emiramura) were not planted to divide my part from that of my brothers”, said Muhumuza

He claimed that his siblings’ purpose was to threaten him into letting go of the land in question with the intention of selling it off, because they were aware of his incapability to acquire enough resources to seek legal redress in the matter.

He also noted that he had previously reported the matter to the clan leaders but efforts to amicably resolve the dispute were futile.

This matter made him restless and he was not clear on what to do next until one time while listening to radio, he got to hear about JPC and what they offer. He quickly jotted down the information and decided to visit the JPC offices.

JPC-Hoima-Catholic Diocese of Western Uganda is a partner of Viatores Christi (VC), an international organisation based in Dublin-Ireland with regional offices in Uganda-East Africa. VC supports JPC to carry out its activities.

The dispute is amicably resolved and an agreement is reached

JPC received Muhumuza’s complaint and conducted a mediation between the parties over the matter at the JPC office and also at the location of the disputed land. This was done in the presence of the local leaders and village heads.

The dispute between the parties was amicably resolved and boundary marks were planted on the said land to separate the plaintiffs land from that of his brothers. A mediation agreement was written and signed by both parties and consequently the two parties were reconciled with one another. 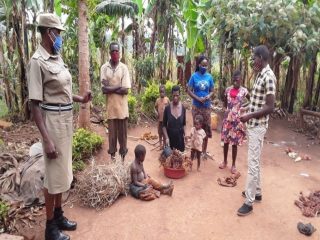